I understand that Mrs. Eileen O'Donoughue's removal will be from O'Connors, North Gate Bridge on Saturday at 4.00 pm to Little Island Church. Burial is Monday after 11.00 am Mass in Little Island to the local cemetery.
Thursday, 26th February, 2015It is with deep regret and sorrow that I want to notify Chapter members and friends that Leo O'Donoughue's wife, Eileen, passed away last night. Our deepest sympathies are with Leo and family. There are no funeral arrangements available yet.  Ar dheis Dé to raibh a anam dilis.

For our January meeting we were back at Padraig Mac An Fheallaigh’s at Dromohane, outside Mallow.  Pádraigh produced a replica of a large, altar style, candlestick, which he made using, for the most part, a skew chisel.  Some of the newer members were fascinated by the ease-of-use and dexterity Pádraigh displayed with that much-maligned implement and several members who had opted out of its use went away determined to try again.

Most turners, it seems, make pens at one time or another but to see somebody else making them can sometimes be a great opportunity to reassess our work methods and practices.  When Paddy Lynch decided to demonstrate how he goes about it there was general satisfaction among the attendance.  Paddy is, of course, one our most popular demonstrators as he talks his way through whatever project he undertakes with total, open, honesty and wonderful witticisms.  During his continuous soliloquy he told us that he doesn’t favour cyanoacrylates (super glue) but prefers to use a two-part epoxy adhesive.  Paddy does, however, use cyanoacrylate for a finish. 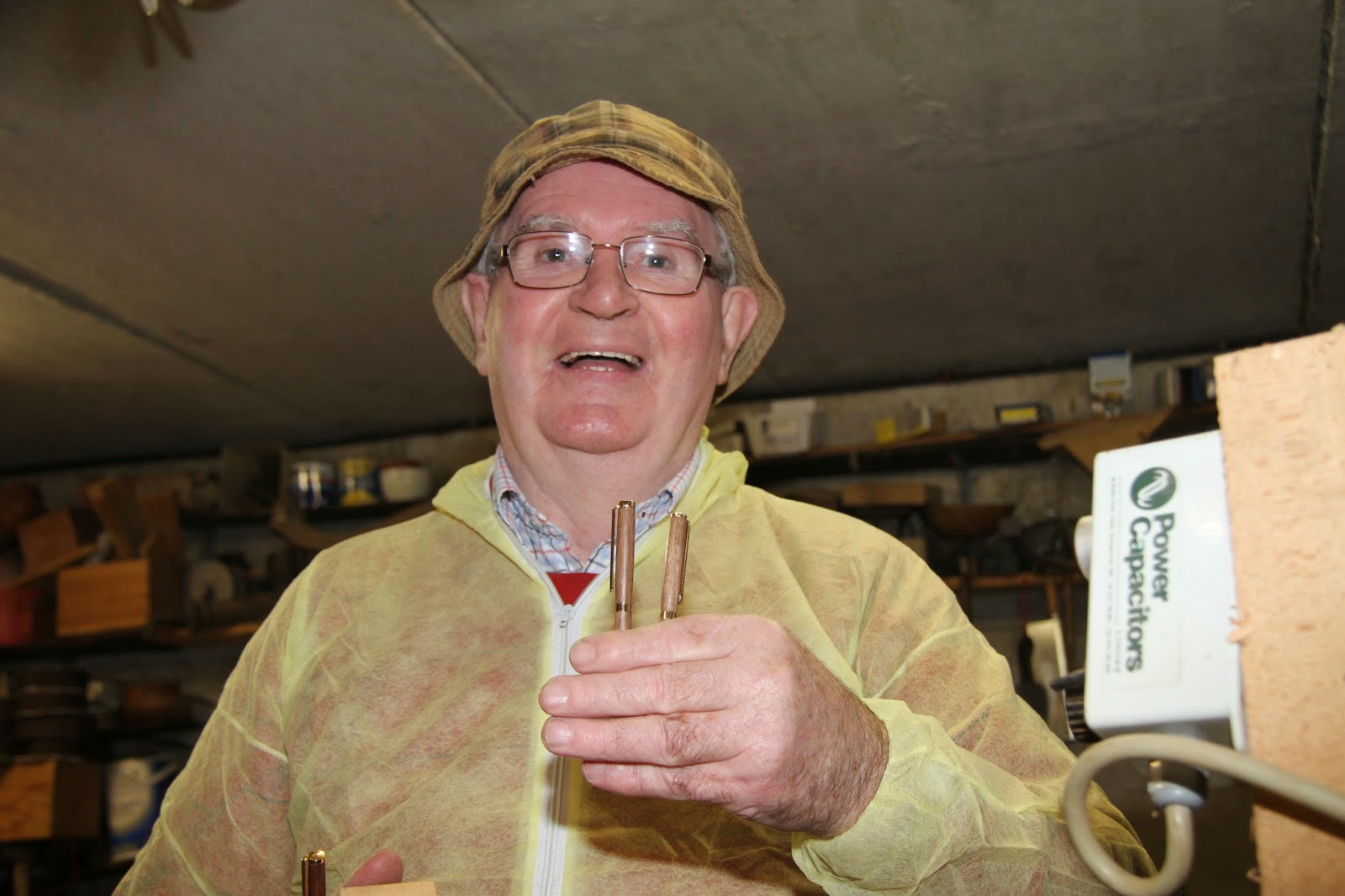 There was only a small entry for the competition, which was an inside/outside candlestick as demonstrated by Charlie at the December meeting.  First place went to David Lee, Second John O’Shea and third Peter Manning.

We have an excellent line-up for our Annual Seminar in the Midleton Park Hotel, Midleton, on the 18th April next with Mick Hanbury (U.K.) and Philip Mahon (Sligo) as well as local turners.  Full details are to be found in an advertisement elsewhere in this Journal.  The hotel have agreed an excellent room rate for the event."
We had our A.G.M. in December.  Before we got down to business we had a wonderful demonstration from Charlie Ryan who travelled all the way from Dublin to be with us.  With great banter and conviviality Charley did and inside/out candlestick in mahogany with a contrasting finial in the centre.  It was a most enjoyable presentation and Charlie was bombarded with questions, which he answered fully.


In recent years we have indulged ourselves with a little party at our last meeting before Christmas and this year was no exception.  I thought about doing a little survey on the possible relationship between the waist measurements of our male members and the quality of the food supplied by their wives/girlfriends.  I was too busy, however, sampling the cakes, pies, sandwiches and other goodies on offer and it was too late when I thought about my survey.  Everything was gone.  Needless to say the contributions from our lady members were mouth-watering.

The competition for December was open and there was a great display of excellent items.

Jim O’Donovan won the trophy for the Turner of the Year, which was presented to him by Chairman, John Ahern.

Following the reading and adoption of the usual reports we got onto the elections.  John Ahern was persuaded to remain on as Chairman.  Michael Pattwell fills a newly created post of Vice-Chairman.  Michael also retains his position as P.R.O.  Mick Bouchier retains hos position of Hon Secretary and John O’Shea continues as Treasurer.  Ger Hennessy is the Health & Safety Officer/Coordinator.  Christy Fitzpatrick is the new Competitions secretary and Joe Kennedy is the Librarian.  The Committee remains largely as it was with Pat Dromey coming on board for the first time.

The meeting discussed the representation of the Chapter on the I.W.G. Executive and it was decided that we should explore the possibility of placing a motion for the next Guild A.G.M. to the effect that each Chapter should have a representative on the Executive instead of the current position whereby each Chapter can send an observer who would not be entitled to vote on issues.

The meeting also heard a preliminary report from Ger Hennessy on the Health and Safety issue and there is ongoing work to be done in the coming year, aimed at producing a comprehensive Safety Statement for the Chapter.