November Issue of the Journal

The May issue of the Newsletter is now available. Click Here

The April Workshop was held in Togher on Saturday 21st April. The new lathe was commissioned by 90 year old Michael Box. The audience were informed by the Chairman that a date has been set for the annual seminar 2013. It will be held in Midleton and the demonstrator will be Nick Arger. Further details will be posted at a later date.

The first demonstration was given by Paddy O Rourke, who turned a platter, and a small bowl.

After the tea-break, the monthly competition was held, the Chairman expressed great disappointment at the small number of entries and hoped that this number would be increased in subsequent competitions.

The second demonstration was given by John O Shea, who turned a mug holder. Again, another excellent demonstration. Further details will be given in the magazine.

See the Photo Gallery page for photos of the day.

John Ahern to demonstrate at the Kerry Chapter meeting in April

The March Workshop started with a minute's silence for the late George Colton and his favourite prayer, the Carpenter's prayer,  was read by Brian McAdoo.

A large crowd of over 50 people attended the workshop, which was given by Peter Manning and Ger Hennessy. Peter turned a four-legged wicker stool and a carbiole leg. Ger turned a spinning top, which he designed especially for his grandchildren. Click here for a preview of some of the photographs. Full report to follow in the next edition of the newsletter.

The Chapter would like to extend their sympathy to the family of our colleague and friend, George Colton, who passed away recently. Ar dheis Dé go raibh a h-anam. 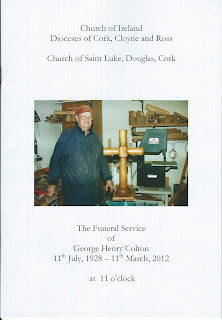 We have purchased a new variable speed Jet lathe and accessories from Ronayne's, Dublin Road Thurles. We would like to thank the staff for their efficiency and wonderful service. These include 3 chucks and an 8" grinder.

New Projects Page has been added

A new Projects Page has been added to the site. We will use this page to post helpful information and tips on active projects. Click here to view

Take a look at who's looking at us on the Internet: 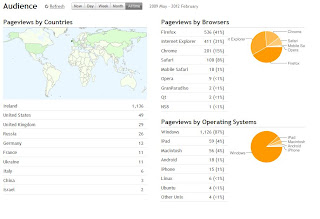 The Newsletter is now available

The Newsletter is now available for your viewing pleasure. Click here.

The March workshop will be held on March 24th instead of the usual 3rd Saturday of the month to avoid clashing with St Patrick's Day March 17th.

The February workshop was held in Leo Donoghue's in Little Island. Leo turned a lazy susan and a standard lamp, it was an excellent demonstration.More to follow in Journal. Thanks to Leo's wife and granddaughter Laura for their hospitality and wonderful home baking.

Click here to see the photos from the day

Here is a link to all of the photos and back issues of the journal uploaded to our website
Newer Posts Home
Subscribe to: Posts (Atom)