Next up was Jerry Twomey, our Chapter Safety Coordinator and several years a demonstrator. Jerry always comes up with something interesting and today was no different with ‘inside out’ turning a lamp. He has a very good approach to woodturning which is one well planned step at a time. And as a result he worked through the process making a potentially complex process very simple.

Here are the main points:

Jerry’s demo again should appeal to all levels. The beauty of Jerry’s project is that it can be made from small cross-sectional stock, 2”x 2”(50x50) and a small circular piece for the base.
A Big Thank You! Jerry from all of us.

See photos of Jerry’s demo below and also the Competition Winners.
And as always a Report like this will never substitute for the real thing so update your calendar if you  haven’t already 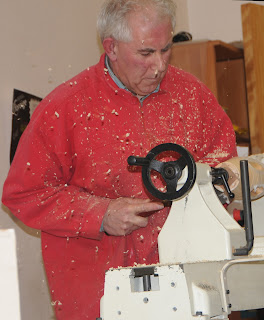 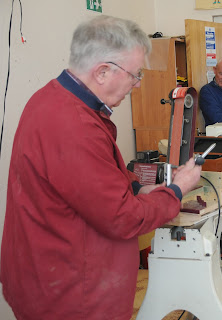 John Ahern, esteemed Chairman, stood up to give the first demonstration of the day. Two parts - part one on sharpening and part two on texturing. He began by stating that nice tools, equipment and timber is to no avail without “ edge “ “ and I mean good sharp tools all the time”. He then went on to explain the difference between “grinding” and “sharpening”(honing). Grinding is where you take a damaged cutting edge or an unsatisfactory grind angle and re-shape it that will necessitate the removal of substantial steel. Whereas sharpening (honing) is the removal of the minimum steel to regain keen edge on a dull tool. John went on to introduce his preferred grinding/sharpening system, the Sorby Pro Edge. This is a belt system with a variety of belts available: aluminium oxide for carbon steel (carpentry and joinery tools), Zirconium for high-speed steel and Ceramic also for HSS but more effective and longer lasting. Johns demo was carefully thought out and dealt with questions as they arose. It was obvious that John was convinced of this system and it delivered great edge as he demonstrated later.
The following are main points:
Grinding.

John also touched on different grindstone types and the importance of keeping the surface of the stone true and clean – there are a variety of dressing tools available. On he went to give a show of fine shavings with each tool previously sharpened. All were impressed. He also demonstrated how a bowl gouge could be used with one hand to stress that with good edge there is no need for force of any sort. To push home the point a little further, when in doubt, stop the lathe and reassess your whole approach – guaranteed its poor edge.

Texturing.
Having comprehensively covered grinding and sharpening John proceeded to an overview of texturing and provided some good tips:

Overall a very good and informative demo with plenty for the beginner and the more experienced. The overall thrust of his demo throughout was on the importance of “edge” and this cannot be overstated. So it was good for everyone, I’m sure, to take a moment to reflect on this most important aspect of woodturning.
Thank You! John.
See photos of Johns demo below.

As Always the members would like to thank today's judges Sean Mc Sweeney and Ger Hennessy for judging the competition, and also for their excellent critique.