Note.
The Ballyhoura Rural Service facilitated the recording and publication of this book.

These extracts from Michael’s short book ‘Life Story The Early Years’ highlights the interesting life he had. For those that knew Michael it will obviously be a very interesting read but it would also be of interest to the historians among us.
There will be a small number of copies available at the next workshop.

Gloster Aircraft was six miles across a flat plane from Dowtys, where I worked (building under carriages for aircrafts). We could see Gloster Aircraft in the distance and all around it there was a ring of barrage balloons to protect it from dive-bombers. In the summer when we would have our dinner breaks at Dowtys we would sit on the roof of one of the buildings and we could see across to Gloster Aircraft. Half twelve to half one was our break time. At one o’clock every day the balloons would be lowered down for servicing – the whole lot down together. Obviously someone had tipped off the Germans that this was happening every day at one o’clock. One day we were watching these balloons go down when we suddenly saw an airplane diving from above. The plane came straight down towards the factory and we said ‘cor’ look at that plane. We didn’t think it was a German as it looked just like a Bristol Bullfighter, as it had a very similar pattern to it. It was a Yunkers88 actually. I got my leg pulled afterwards for getting it wrong. Anyway this plane levelled out over the factory, dropped one bomb and it hit the tool room at Gloster Aircraft. It killed fifteen people and wounded a lot more and destroyed a whole load of precision machinery. Then away it flew up into the air and it was gone over Chosen Hill just on the edge of the Cotswolds. That’s where they roll the cheeses down the hill... And he was away and gone out of sight before anyone realised what had happened. Then all the balloons went up again, it was pathetic. Obviously if they were lowered one at a time they would still have protection… It is easy to criticise in hindsight but it could have been avoided with a bit of thought. That was a wartime experience of bombing that I had. Bloody daft things happened in the war!…
Conscription.
I tried to join up a couple of times and got told off by the boss… When the war finished and they didn’t want planes anymore, we were all called up because conscription was still on…A friend of mine was called up at the same time and we volunteered to join the navy so we went to the HMS Royal Arthur, Skegness…During that period we got interviewed and did a medical…eventually had to pass an exam to see what we knew about engineering. I passed anyway and got accepted as a recruit to be an engineer in the Fleet Air Arm… We did a general induction of forces set up. It was like basic training. They had a rifle range there and they taught us how to use a rifle. They also taught us how to do various things in the engineering line and it was quite interesting. My knowledge of aircraft helped me to get into the fleet arm of the navy which was one of the better sections. We were far better treated than the ordinary navy sailors. I had nearly three years in the Fleet Air Arm. I was working on the naval equipment of the Spitfire. It was called the C Fire with slight modifications to suit naval use. They had a different shape intake for the engine for low flying over the ocean. It had landing gear that was lower down for deck landing on an aircraft carrier where the hook would catch to keep it down…
When we eventually ‘passed out’… we had to do six weeks with the RAF Training School near Cannock Chase in Staffordshire… where we had to learn about aero engines because those who had been selected to be air mechanics, of which I was one had to go on to Hednesford. It was a training place to learn about aircraft jet engines…

I worked on a lathe as an apprentice and on the next line to me was a man that was in fact a very good turner. He came in one day in a blazing temper and said “that bastard pinched my logs again” and I said what are you talking about?
It seems that his brother kept him in firewood. He used to bring a load of logs down to where this man lived which was on a very steep bank. There is a place in Chalford Valley near Stroud where most of the houses are on a steep bank. There is no road or such for vehicles and even today the deliveries are still made by donkey, would you believe. This man lived in one of those cottages near the bottom. They called them pitsies? Anyhow he had a store of wood next to his cottage. He had a feeling that someone was pinching his wood. He knew it was disappearing and he had a feeling it was a bloke from a cottage above him who worked in the same factory, the same shop actually. He could never catch him. He would stay up at night watching but could never see it go.
Anyway this day he came in blazing. He brought a log of wood into the works. It was about a foot long and about four inches in diameter. He bored the log so it had a hollow chamber inside it. It was around November, fireworks time when you could buy a one penny or halfpenny banger. The halfpenny bangers were called little demons and you could buy twelve for sixpence. Anyway he brought in a load of  these demons and stuffed them into the log. He then turned a round of wood and bunged the end of the log so that you couldn’t see anything. “ I will get the bastars” he said… So he took the log back and put it nicely on his pile of logs… one morning he came in and said “the bugger has it, its gone…

(There’s a nice twist to the end of that story of the log man but you really need to read it in the context of Michaels full story, which is truly a step back into history.)

(‘Chalford Donkey delivering shopping’ can be seen on YouTube)

In memory of our dear friend Michael. 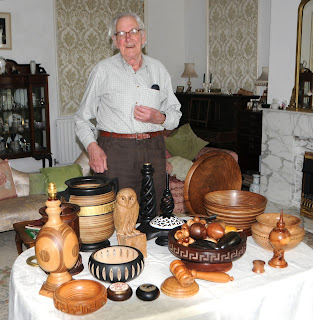