We held our A.G.M. for 2015 on Saturday 5th December 2015 at our usual venue at Togher.
To open the day we had a demonstration from Gorey woodturner, Pat Carroll.  Pat made a big impression and the general feeling when he had finished is that we would certainly love to have him visit us again.

He started by making the neatest spherical hollow form that this writer has ever seen.  In fact he made it in two pieces and then glued them together.  The joint was cleverly concealed by the narrow beads that became a feature of the piece.  He left the narrowest of openings at the top and the whole thing would almost certainly be a wonderful conversation piece wherever it would be on show. 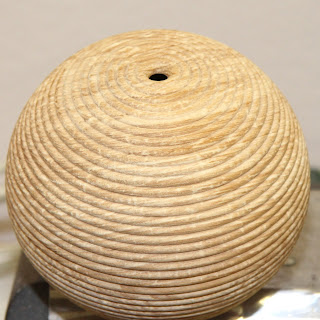 Pat's next project was a shallow bowl with a wide brim, coloured and textured.  He used an interesting technique for the colouring; he used spray-paint and used a blowtorch to quick-dry it.  (Don'y try this at home unless you have a fire extinguisher and a fire blanket close at hand)

The third demonstration was a Christmas-tree decoration consisting of a hollow sphere and a long finial.  Pat used the same technique to colour that and the result was really beautiful.  He gifted it to an 18-year-old young-lady guest present and she went home literally walking on air.
Thank you, Pat, for a great morning and we look forward to having you back again.

During the break we availed of the delicious cakes and mince-pies the members brought with them.  They were all delicious and we were very grateful for them but a certain sponge with raspberry filling (I think it was raspberry anyway)  had us all in a queue in case it would be all gone before we got to it.  (Top left corner of the photo.)

We didn't have a competition but several members brought in work for a display.

John Ahern chaired the A.G.M., which opened with a minutes silence for the members who had passed away during the year as well as the parents, spouses or other relatives of members.
The Secretary's report for the year has already been published on this website.  That outlines a very successful year for the Chapter and a very enjoyable one for the members.

In his address the Chairman thanked everybody who had contributed to the running of the Chapter.  The completeness of the Secretary's report meant, however, that there was little left for him to say.

In the Treasurer's report it was shown that the Chapter is in a good financial position and there was much praise for the stewardship of the Treasurer, John O'Shea.

Ger Hennessy introduced a report on Health and Safety.  This was met with great approval and appreciation for Ger and his Health & Safety Committee.

We got through a fairly long agenda without too much delay and we discussed a wide range of topics with most members contributing.

Watch out for the full list of workshops scheduled for next year.  It will be on this website/Facebook page in a few days.

The officers are the same but there were some changes to the committee.  Again those will be put up in a few days when Mick Bouchier gets time to bring them up to date.

Our "Turner of the Year" is usually announced at the A.G.M. and the Chairman's Trophy is presented.  This is usually based on points earned from the workshop competitions but as those points were not available for the current year a small sub-committee was formed and they unanimously agreed that David Lee was to be the winner.  In presenting the trophy the Chairman pointed out that Dave had brought great honour to the Chapter by winning or being highly placed in several competitions throughout the country, including Gorey, Kerry and The National Seminar.  The Chairman also referred to Dave's contribution to the Chapter through the work that he does.  He is a very popular winner.

The year ahead promises to be an exciting one and any new developments will be fully reported on this page.  A couple of questionnaires were given out during the meeting and it would be very helpful if they could be returned at the next meeting.