Cork Chapter Master Class 2013
A Master Class was held in Tony Farrell's spacious workshop in Ballinora Waterfall in conjunction with the Annual Seminar on Sunday 21st April 2013. Nick Agar was the demonstrator and as he had done on the previous day in Midleton he made a Viking Sunset Bowl. This time however he again explained in detail as to how it was made and coloured to those who had not seen  the previous day. Nick then divided the class into three groups and each group was allocated to one of the three lathes in Tony's workshop. After a short break for tea coffee the class under the supervision of Nick began their project.
Lunch was prepared by Tony and his friend Alice, it was superb, indeed up to the standard of any hotel. After our lunch and tea and coffee, we resumed our work on the bowl, all of us were very satisfied with the end result. The day moved swiftly as we worked and  a mighty crack was had by all.It was again a very successful and enjoyable day.  All of the allocated 20 places were filled within a few days of the Seminar announcement.
The Cork Chapter would like to thank Tony Farrell for the use of his workshop, supplying timber, tea, coffee, scones and lunch.We also thank Alice for the way she looked after everyone and Audrey photographer for her superb pics. We thank all who supported the Seminar and the Master Class,it was indeed a wonderful success, and we look forward to doing it again in 2014.   Finally to Nick Agar for the knowledge he imparted on his way of turning and coloring and the fun we had with him. 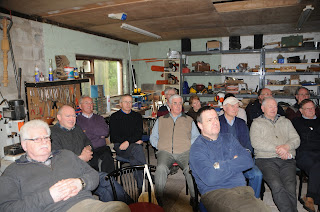 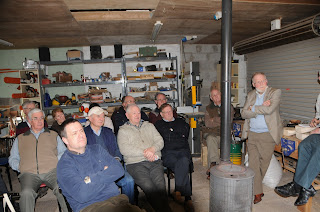 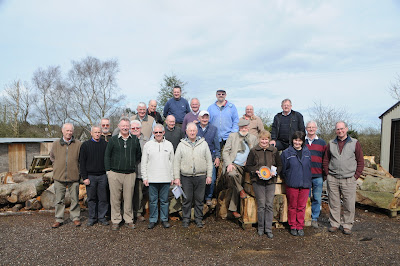